Llanbedr and Huchenfeld were twinned in 2008 following many years of exchanges between schools, churches, musicians and community leaders.

A close relationship was developed and goodwill established between the communities, in remembrance of the ghastly occurrences in 1945 at Pforzheim and Huchenfeld during the Second World War.

We – that’s the Cross-of-Nails-Group and the Friends-of-Wales-Club – proposed John Wynne for the Gernika Peace Prize and we are all delighted that the committee in Gernika chose John to get the Peace Prize this year.

The presenting of the Peace Prize was on April 26th in Gernika (North Spain). Ben and his wife represented John at the presentation. We are glad about that. From Huchenfeld Petra Alexy, Bernd Heintz, Sabine Gebhart and Susanne Braeutigam joined the Delegation from Pforzheim. 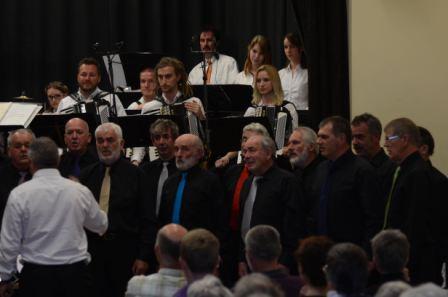 Our friends at Huchenfeld celebrated the 5th anniversary of our twinning. Here are some pictures: 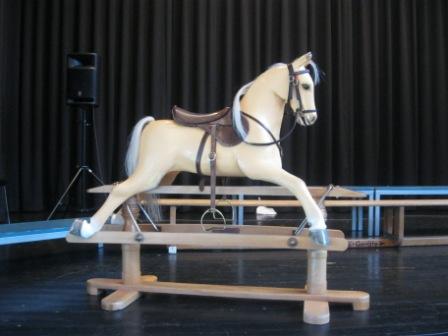 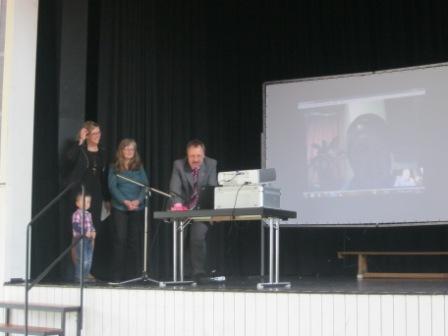 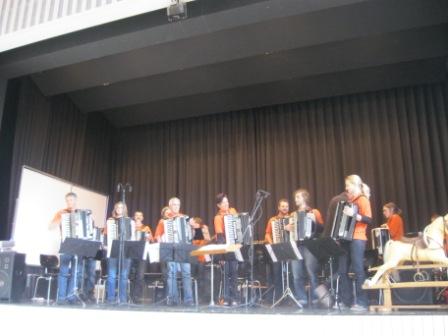 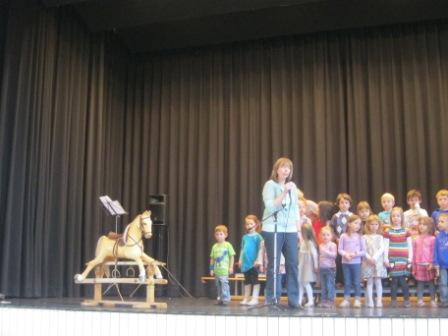 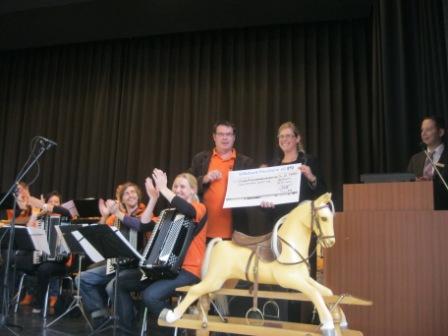 Sabine gave a cheque to the accordion orchestra for their visit in May. 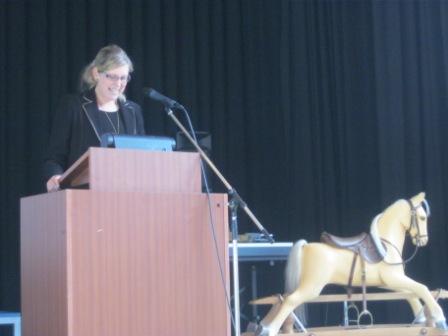 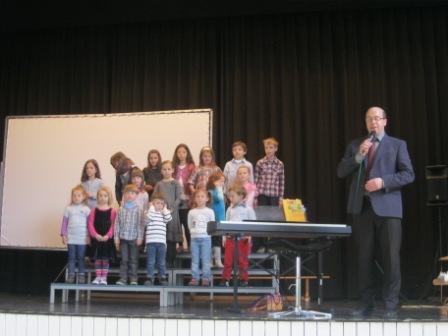 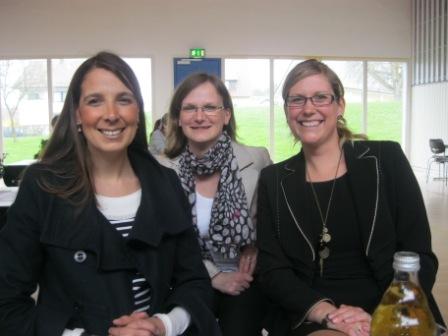 The delegation from Huchenfeld during their visit to the 2013 Llanbedr Beer Festival. 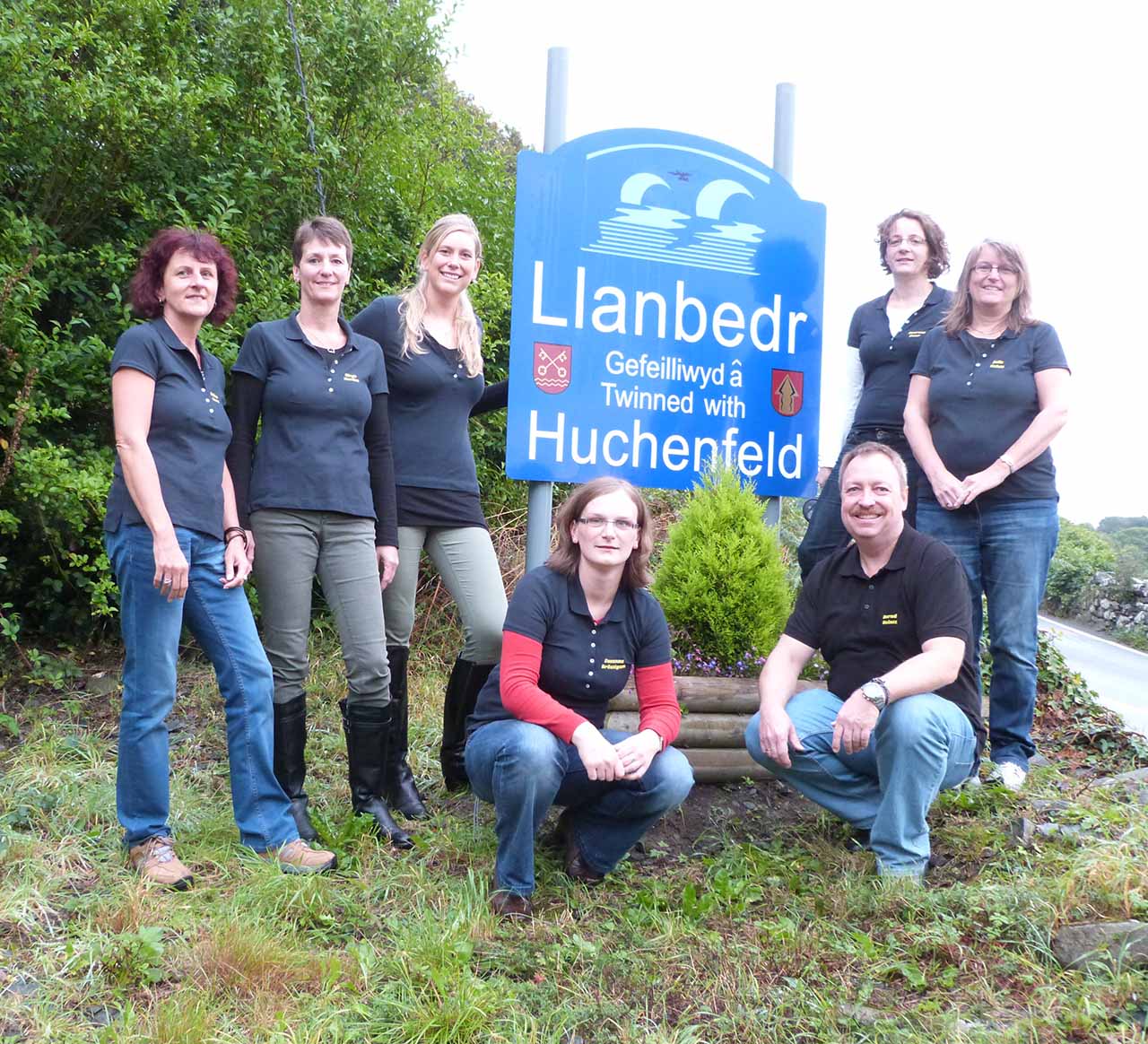 A PARTY to celebrate a decade since the twinning of two towns united by the horrors of the Second World War has proved a great success.

A group of Llanbedr councillors travelled to Huchenfeld, near Stuttgart, to commemorate a decade since the official twinning ceremony.

Hundreds of schoolchildren have travelled to and from Germany on educational trips over the last 15 years in a bid to encourage understanding and tolerance.

The friendship developed after John Wynne of Llanbedr, a former RAF Wing Commander, presented a Welsh rocking horse to the village as a symbol of hope in the mid-1990s.

Wing Commander Wynne lost his aircrew in Huchenfeld after they were killed by the Nazis and Pforzheim, near the German town, was devastated by bombing raids.

Chair of Llanbedr Community Council Kevin Titley, who travelled to south Germany over the weekend, was pleased to reinforce the links between Llanbedr and Huchenfeld.

“The delegation from Llanbedr received a warm welcome from Frau Sabine Wagner, the mayor of Huchenfeld, and from the Freundeskreis Wales club,” he said.

“We had a very enjoyable visit as the people of Huchenfeld were very hospitable and had arranged a busy schedule of activities for us. We also agreed on some priorities to take the twinning relationship forward.

“Frau Wagner was presented with a present from Llanbedr to celebrate the 10th anniversary of the twinning and was also given a greetings card made by the children of Ysgol Gynradd Llanbedr that was signed by each child.” 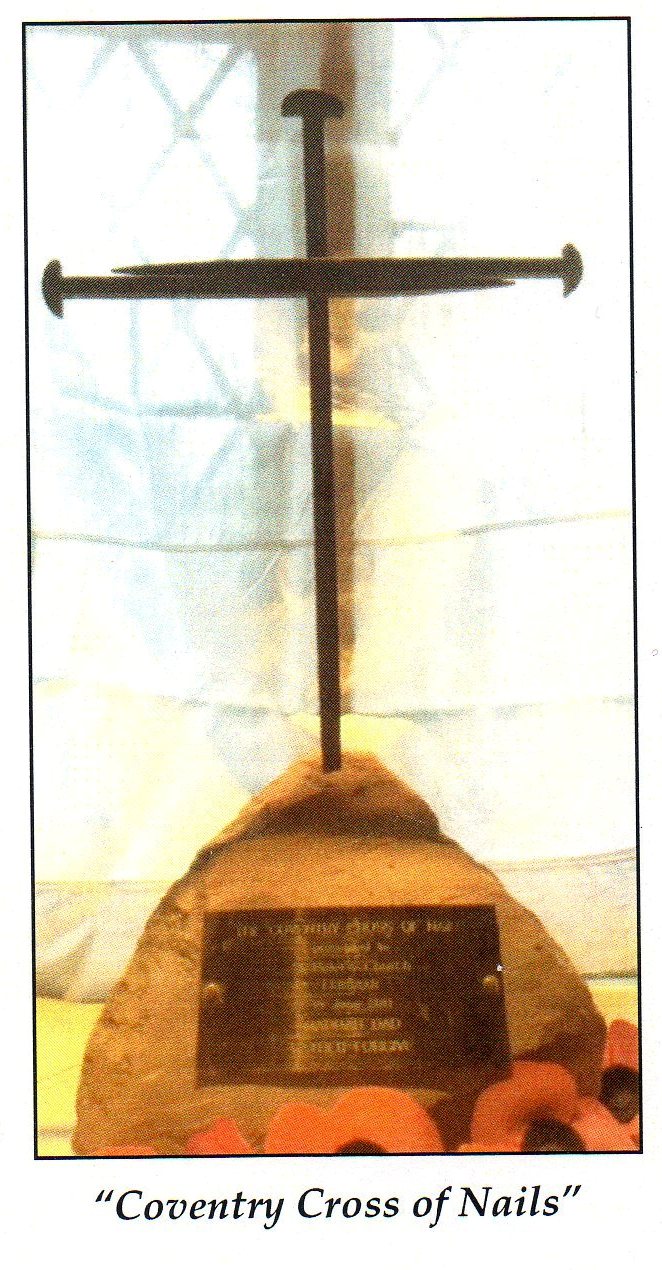 Wing Commander John Wynne, flew his damaged Fortress bomber back to base alone and was later involved in a remarkable postwar reconciliation – obituary. 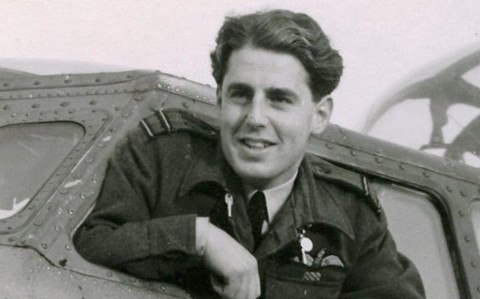 Wing Commander John Wynne, who has died aged 97, flew his four-engine bomber back to base alone after all his crew had bailed out over Germany. Later he joined one of the first Valiant V-bomber squadrons and flew operations during the brief Suez conflict in 1956.

Although only 23, Wynne was already a veteran bomber pilot when he took off on March 14 1945 in his US-built B-17 Fortress of 214 (Special Duties) Squadron to provide electronic jamming support for a bomber force attacking the oil refinery at Lutzendorf, near Leipzig.

On the return flight, his aircraft was hit by fire from a night fighter – believed to have been piloted by the Luftwaffe ace Martin Becker. An engine was put out of action and a fire broke out. The aircraft descended to 1,000ft as Wynne struggled to maintain control of the aircraft.

Using information provided by the Air Ministry, the crew believed that they were now safely flying over Allied-occupied territory. Wynne ordered his men to abandon the aircraft while he remained at the controls. He was now alone, but trapped by his equipment, and by the time he had freed himself he was at such low altitude that even if he had jumped it was unlikely his parachute could have been deployed.

So he determined to fly the damaged bomber home to England on his own. Unable to make radio contact with airfields he passed, he eventually managed to make an emergency landing at a USAAF airfield at Bassingbourn in Cambridgeshire.

The arrival of a battered all-black bomber bristling with radio and radar aerials, and with only a pilot on board, caused great suspicion and amazement until Wynne was able to explain what had happened. He had been airborne for almost 10 hours.

Of the nine men who bailed out, two were injured and taken to hospital, where they were treated. The other seven were captured, interrogated and taken to a civil prison. Two days later, they were taken by truck and driven through what was left of the streets of Pforzheim, a city which just a few weeks before had suffered one of the most severe bombardments of the war.

The British airmen were taken to the nearby village of Huchenfeld, where they were guarded in a school. The following day, however, an angry crowd, including members of the Hitler Youth, dragged them into the street. It was apparent that they were to be hanged. Three escaped in the melee and managed to hide, but in minutes the remaining four men were shot.

Of those who escaped two were recaptured the following morning and sent to a PoW camp. The third was picked up later, dragged away and shot by a Nazi mob.

After the war, some of those responsible for the killings were put on trial and sentenced. 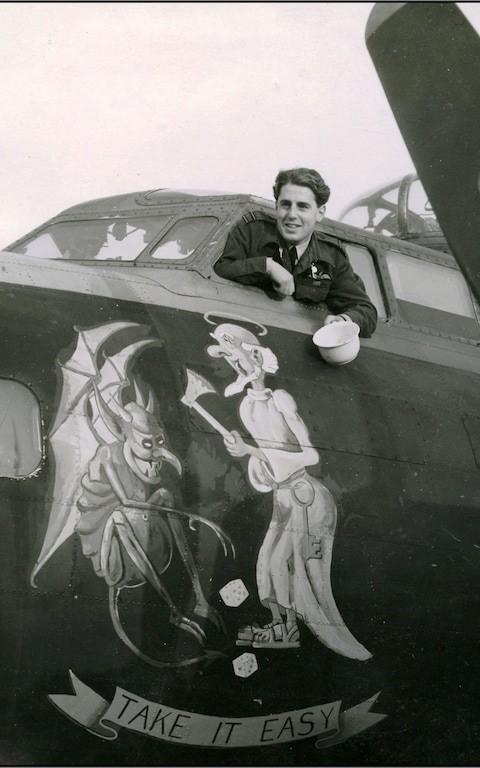 Some 40 years later, Dr Curt-Jürgen Heinemann-Grüder, a Lutheran pastor and former army officer who had retired to Huchenfeld, became aware of the atrocity. He resolved to place a memorial at the place where the airmen had been killed. Against strong local opposition he persevered, and in 1992 a simple plaque was erected on the wall of the church bearing the names of the victims and the words “Father, forgive”.

When Wynne, who was now farming at Llanbedr in North Wales, read reports of the church service for the unveiling of the memorial, it was the first he had learnt of the horrible fate of his crew. Deeply moved, he and his wife commissioned a Welsh craftsman to make a wooden rocking horse, which he presented to a new kindergarten at Huchenfeld. The horse was called “Hoffnung”, the German word for Hope.

As part of a developing friendship, the villagers of Llanbedr and Huchenfeld began a tradition of an annual exchange-visit of schoolchildren, hosted by local families. The two airmen who had escaped also became friends of the German village.

In February 2008, members of both communities attended a twinning ceremony to link formally their villages, marking the climax of a gradual process of reconciliation.

In June 2011, St Peter’s Church at Llanbedr received its own Cross of Nails, accompanied by a message from the Archbishop of Canterbury, Rowan Williams. Wynne was instrumental in this: he was a man who saw the importance of building bridges of friendships between communities.

John Wynne in the cockpit of his B-17 Fortress bomber

John Gwynedd Wynne was born on May 8 1921 in Chester. His father was a mining engineer and his early childhood was spent in Malaysia and Japan. His family returned home via India to live in Cornwall. He was educated at Cheam School in Surrey, where he was a contemporary of Prince Philip: the two boys shared joint first in the high jump. Young John completed his education at Bembridge School on the Isle of Wight.

He enlisted in the RAF in November 1940 and trained as a pilot in Canada. On his return to Britain in February 1942 he converted to Wellington bombers and in September delivered aircraft to Egypt via Gibraltar, West Africa and Khartoum. Shortly afterwards, he joined 40 Squadron. Over the next nine months Wynne completed 40 bombing operations, some flown from Malta and most from advanced landing strips in Libya.

He attacked targets in support of the Eighth Army as it advanced to Tunis and was part of a flare-dropping force that illuminated targets for other bombers. At the end of his tour he was awarded the Distinguished Flying Cross.

After a series of appointments as a bombing instructor he returned to operations in 1945, joining 214 Squadron, whose role was to provide electronic support to the main bomber force. Flying with the bombers, the 10-man crew of the B-17G Fortress operated equipment that jammed enemy night-fighter communications and the Luftwaffe’s air-defence radar systems.

After his lone flight back to England, Wynne spent the next four years flying aircraft in support of the Radio Warfare Establishment.

In February 1952 he joined 109 Squadron to fly the Mosquito. But within a few months he converted to the new Canberra jet bomber, before returning to 109 Squadron. On promotion to Squadron Leader he formed and commanded a new Canberra squadron, No 76.

In 1955 Wynne started to fly the RAF’s first V-bomber, the Vickers Valiant, part of the UK’s nuclear deterrent, before re-joining 214 Squadron, his wartime unit. Within a few months, he flew a Valiant to Malta and took part in the Suez campaign, bombing Egyptian airfields.

In 1958 the squadron began a series of trials and long-range flights to prove the air-to-air refuelling capability of the V-bombers.

In 1960 Wynne was posted to strategic air command at Barksdale air force base in Louisiana. He spent two years with the USAF, flying the eight-engine Boeing B-52 Stratofortress from Barksdale.

On his return, he spent five years in the MoD on operational requirements for the V-Force, followed by three years in a Nato appointment in Norway specialising in nuclear warfare. This knowledge later proved invaluable for helping to resolve some of the problems facing British sheep farmers as a result of the radioactive fallout from Chernobyl. He retired from the RAF in 1973.

Wynne farmed near Llanbedr and bred Welsh-Cambridge crossbred sheep and he remained actively involved in running the farm until late in life. He was an ardent conservationist and a founding member of the Red Squirrel Trust of Wales, which continues to preserve the endangered population of the species on Anglesey.

John Wynne married his wife, Pip, in 1948 and she and their daughter, Elisabeth, survive him; their son, Benjamin, died in a farming accident on November 8 this year.

Proceedings got off to a foot-tapping start with songs from the Cambrian Coast Community Choir who meet every Monday night in Llanbedr Village Hall. Then some beautifully lyrical pieces played by young harpist Erin Lloyd were followed by a lively Skype session with Huchenfeld, our twin town in Germany. Their Accordion Band provided a humorous interlude before local photographer Mari Wyn Lloyd described her degree project which involved documenting the life of the farming community in Cwm Nantcol. Her gritty black and white photographs of the region were stunning.

Afterwards, everybody had a chance to look at the various stands in the hall…a local history display, a Llanbedr-Huchenfeld stand telling the story behind our twinning, garments knitted by the two knitting groups who meet in the hall every week, displays by the Yoga and Tai Chi teachers, a Welsh learners’ corner, and cakes decorated by Beti Miller who had made a fabulous rocking horse cake complete with a model of “Hoffnung”, the little rocking horse given to Huchenfeld Kindergarten in 1994, as a token of reconciliation after the horrendous events that took place in Huchenfeld at the end of World War II. 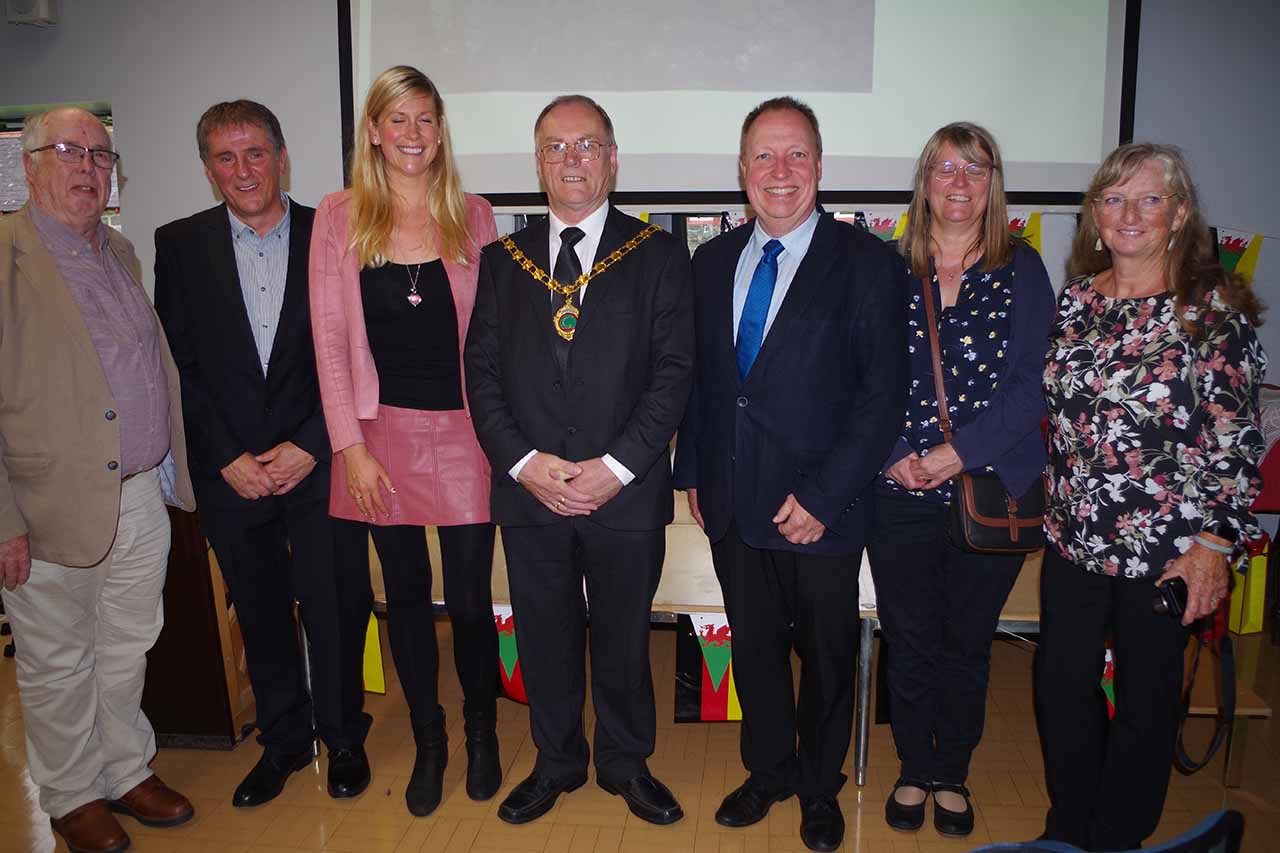 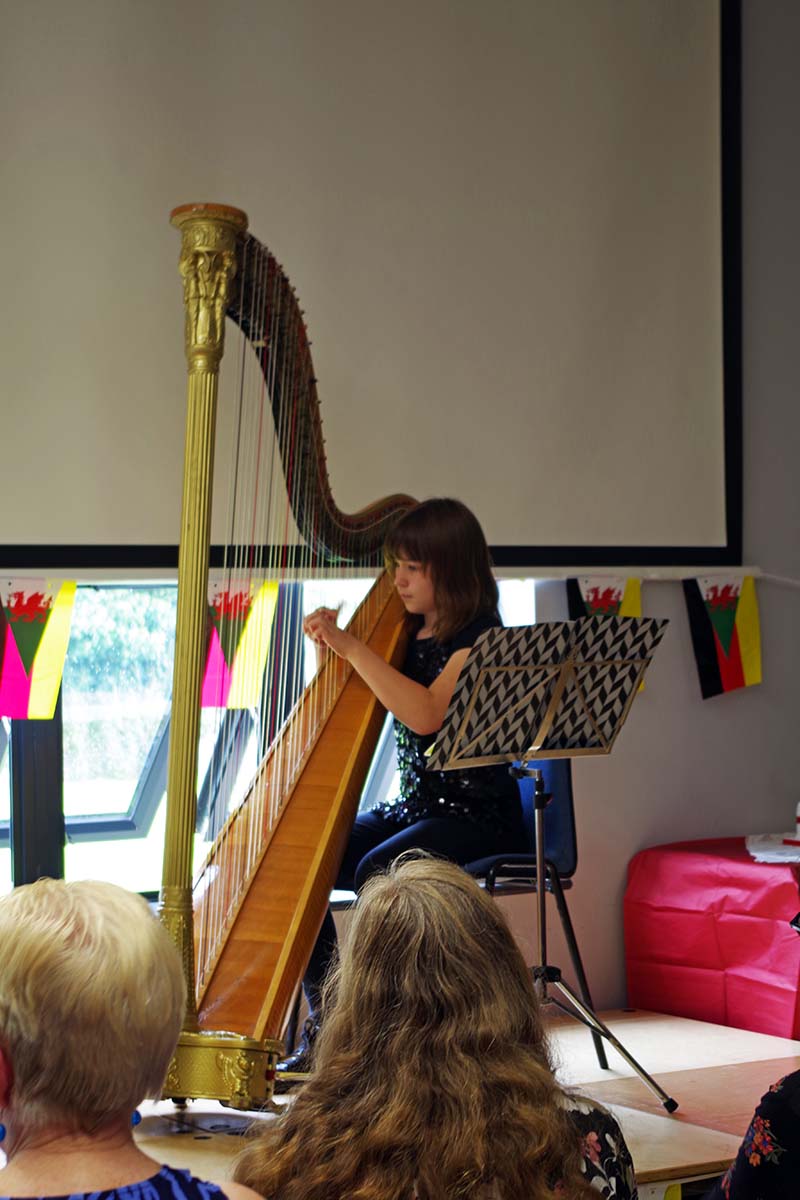 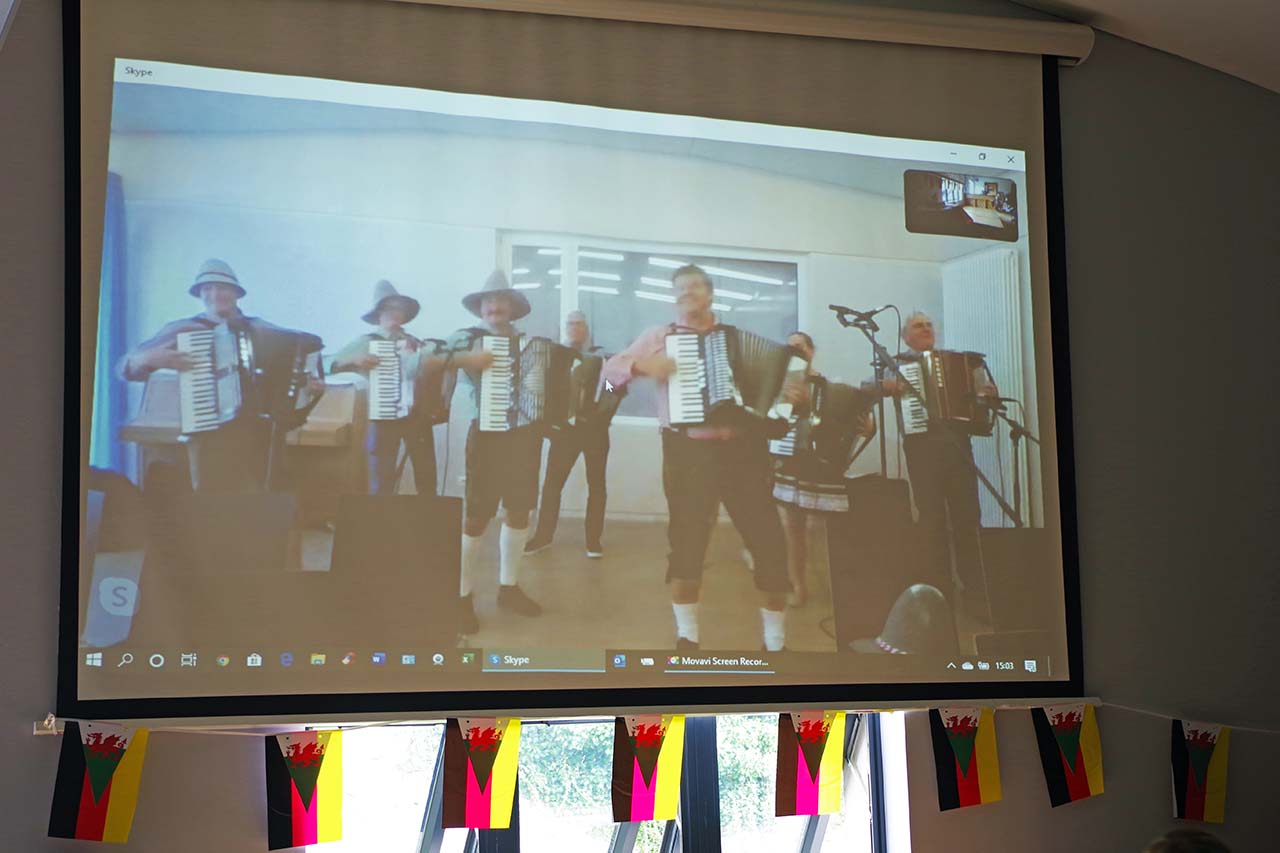 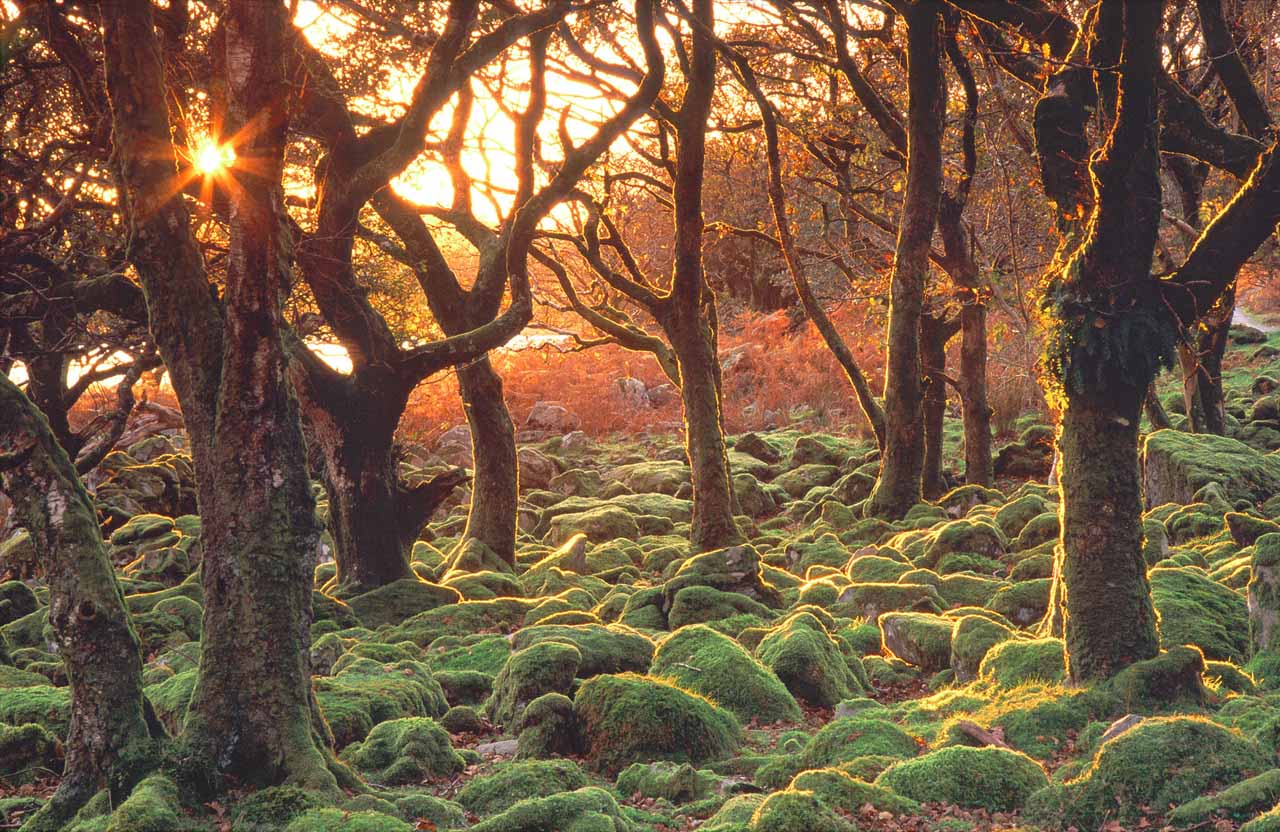 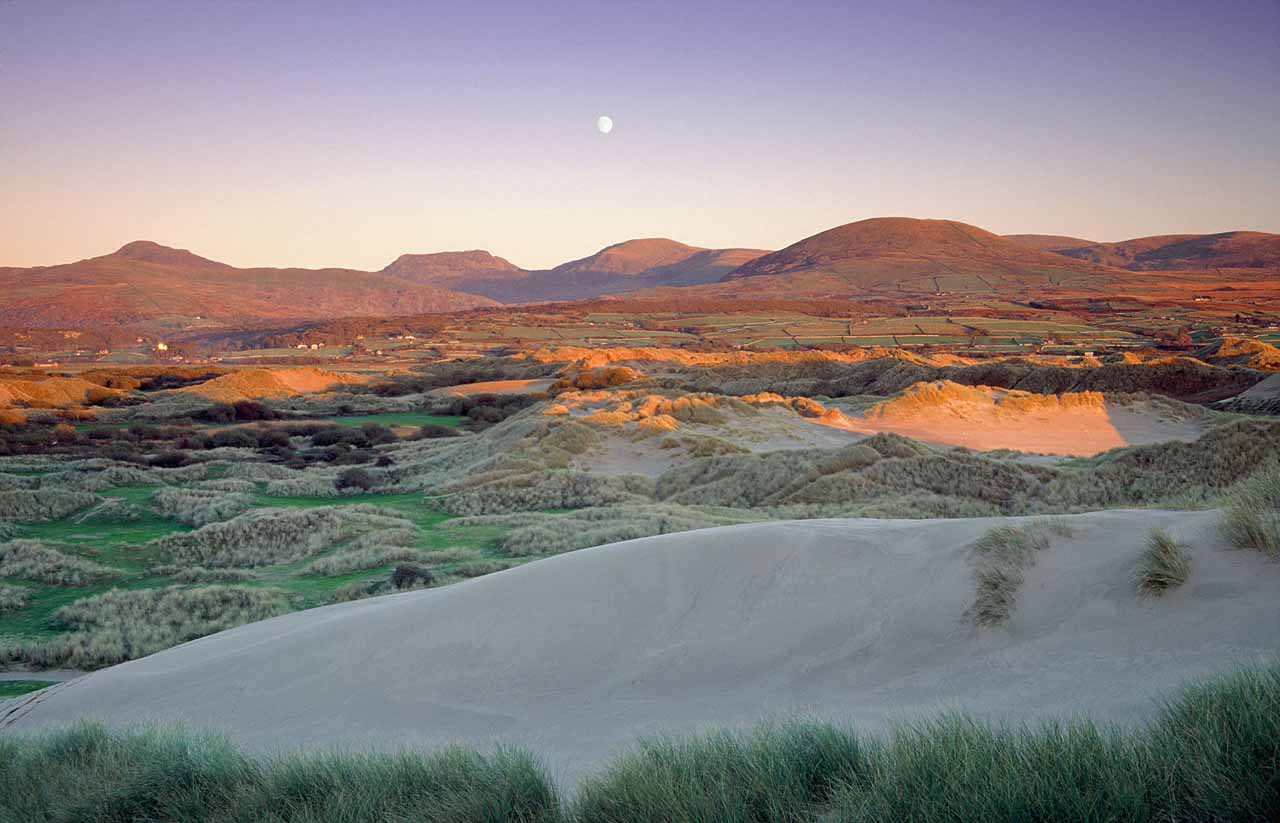 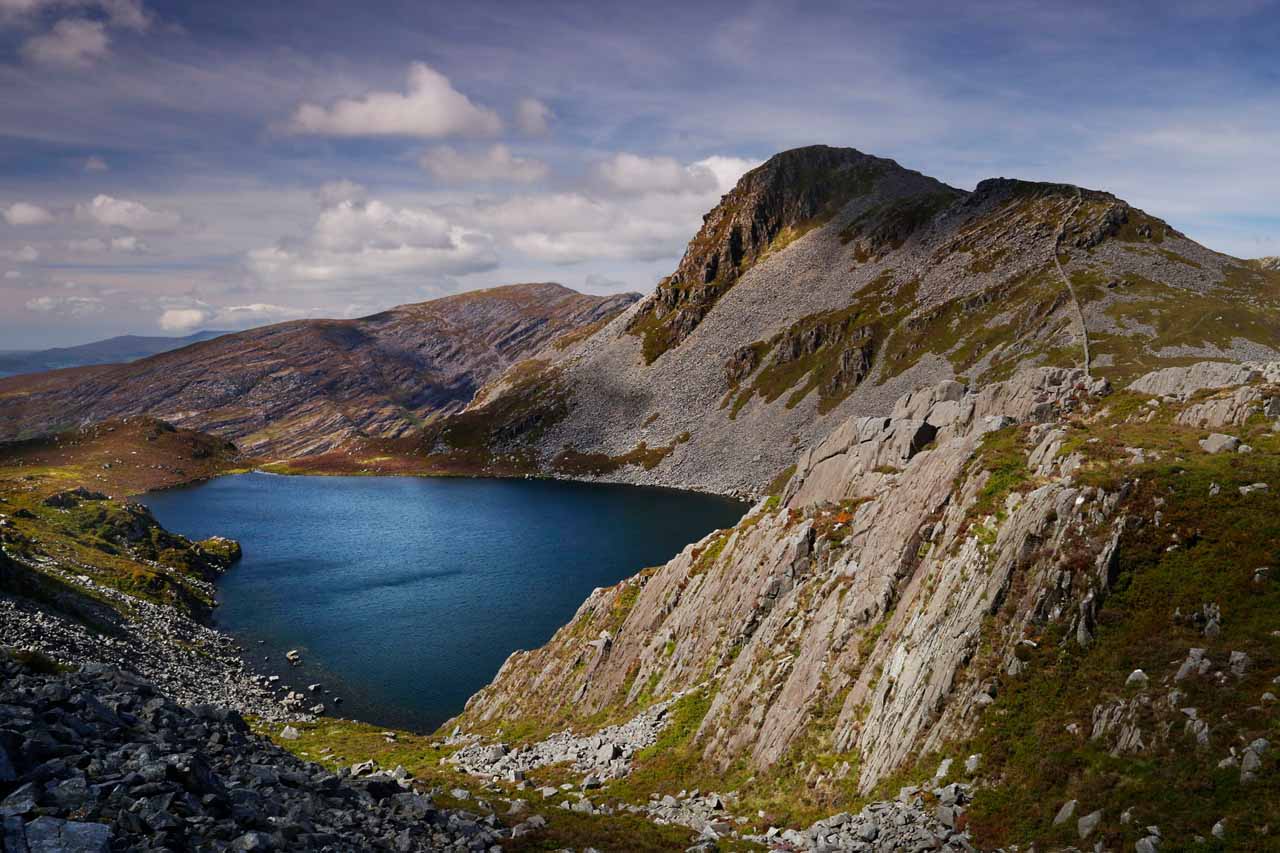 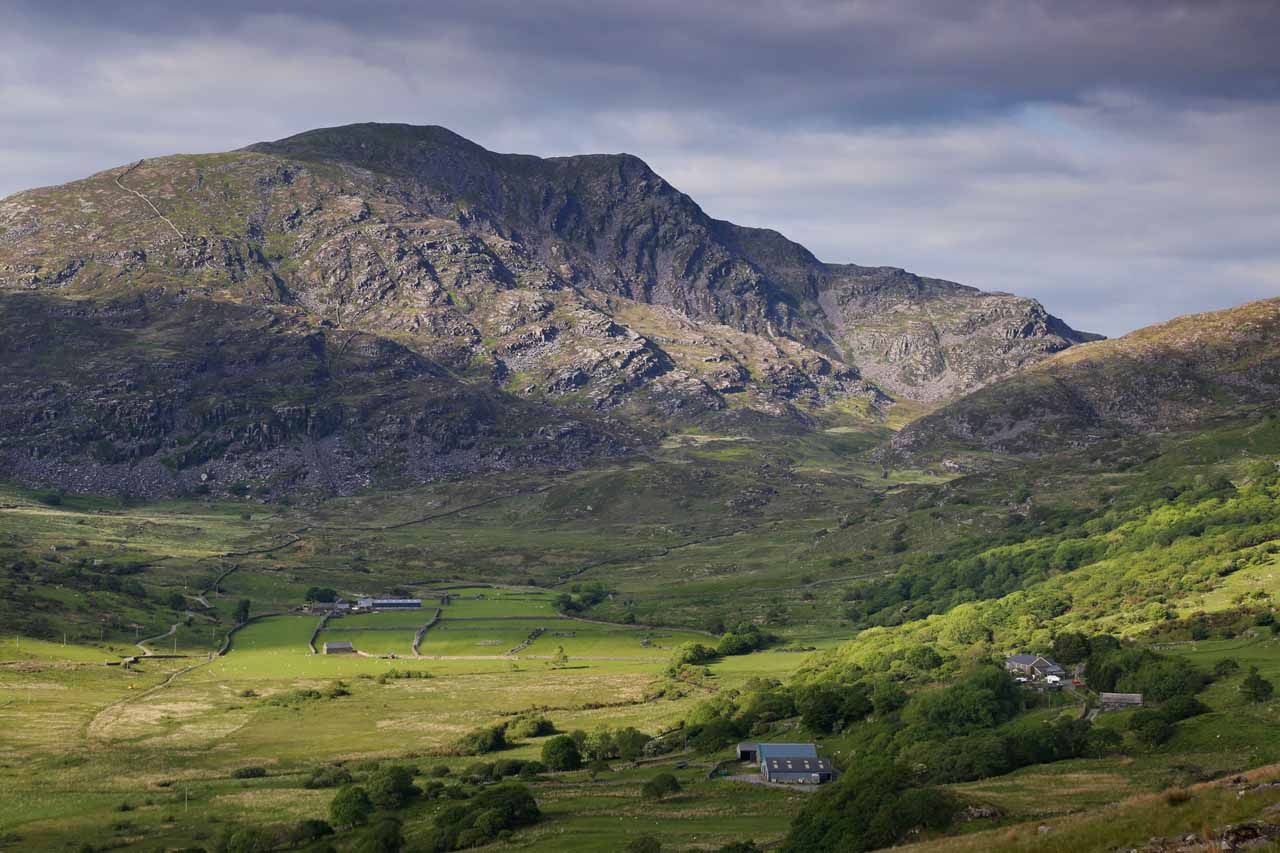 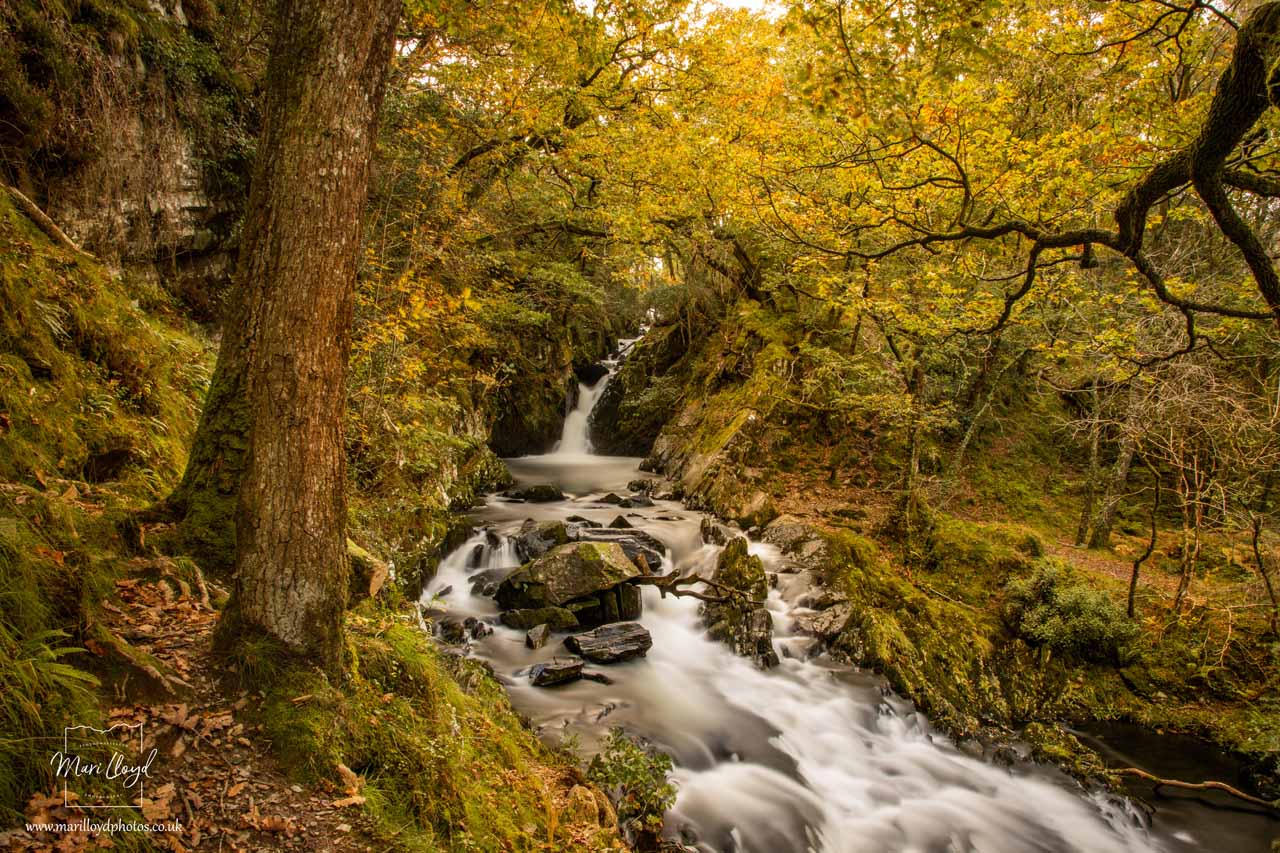